During 2014 I did not make as much as in previous years and certainly did not blog as much. On that regard I seem to be following the trend, but I hope blogs still are here to stay because I love to read them! But I can see how instagram is enough if you don't have much to say and only want to share your work. I have been commenting less as well, but I would comment much more if somebody would make it easier to do with the smartphone.

Not making as much and not bloggin as often became an un-intentional test - would I drop my sewing hobby all together if I slow down? That has been my fear for as long as I have been sewing. It turns out I won't. I love it and have been sewing through out the year but on a far slower pace. And I like it. It does not quite fit with the internet world of sewing and sharing, but here and there I have noticed that many are ready to slow down a bit. Not just change from blogs to instagram, but you know, maybe watch a TV show and not handsew a binding or knit at the same time. It is amazing how much we quilters and knitters get done. It has been great to make so much during the last four years, but I have reached the point where to just sit and watch a TV show is great too! I also have noticed, that I like to work on a project for a longer period of a time. Let it rest and pick it up again even few years later. Combining these kind of projects with instant satisfaction projects that can be finished in few days seems to be a formula that works best for me.

One of the quick projects that I made this year but did not share yet is my Umbrella Prints challenge entry, only I missed the dead line by one day :( Never mind, it was really fun to make, I really like these kind of challenges!

Even thought I made it in May my inspiration came from Christmas. As much as I like the Carl Larsson type of Christmas musings there is another kind of Christmas magic that gets very little attention. When I was a child we lived in an appartment building and my favourite thing during the dark December month was to look at the Christmas windows of the near by appartment buildings. To me they looked like little happy postcards full of light. So when I was arranging the little pieces of fabric that came to my mind and was my inspiration 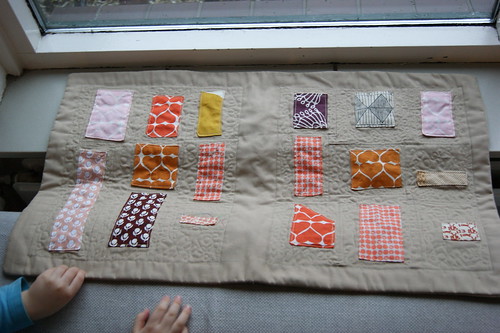 Picture taking is still not my strong point. Luckily I had little help this time!